Devouring Venus Film Financing Tips from Marty Hardin. Here is how we successfully raised financing for Devouring Venus. First, I went through all of my contacts: relatives; business; friends and social contacts. I sent them the following email, which successfully helped us secure our film financing.

For some of you, this will be "out of the blue" but, if you've never known a filmmaker, there's always that one day that comes when they turn to you and ask, "Hey, would you like to invest in a film?"

Seriously - it's that day. Please don't be offended and don't worry if you don't respond (really, it's okay if you don't). This is being sent to a lot of folks. As a filmmaker, you learn to ask everyone. And while you may not have an interest (or the cash) - that's okay because you may know someone who does.... Just sayin'.

Look, this is my first "at bat" as a writer/director/producer. This has been my dream and a long-term life goal. I'm turning to people I know and trust to help me get this film made, because it really does take a village.

So, at this point, I've probably lost a lot of you. That's alright. BUT, if you're still reading, bless you. Here's the pitch:

What am I trying to do?

I am trying to shoot a feature length film on a shoestring budget.

How much is that "shoestring" budget?

$25k - that's 1/100th of the budget of the last film I was working on ("The Twelve Dancing Princesses" - $2.5M (USD). It's less than most small agency 30 second television commercials I've produced. Seriously, it's small.

How can I make it as cheaply as this?

I am working with John Russell and Tracy Nicole Cring. Two amazing filmmakers/producers who have shot 18 award winning feature films. They know every trick in the book for cutting the right corners. They have 3 films coming out this year. Considering I went to them with an original budget estimate of $60k and I then watched as they sliced and diced to get it to $25k, I've watched them work their magic on the numbers with my own eyes.

Where does the money go?

Why am I not doing this through a crowd funding sight like "Seed and Spark", "Kickstarter", or "Go Fund Me"?

Simple, while more money goes to the project and the people investing money actually own part of the film. If you go to crowdfunding sites and give money to a film, you get some trinket (a signed script, or video "thank you). What I am doing is giving you an actual stake in the film.

Let's be clear: this is not a donation - it's a business transaction. Any money the film makes goes directly back to the investors first until they have been paid back their original investment plus an additional 20% as the funds come in. After that 100% + 20% is paid in full, investors continue to make 50% of any additional profits. The other 50% is paid to the filmmakers, director and any other people who have deferred payment (some people are investing their time and/or talent in lieu of cash up front because they believe in the film).

Is this a safe investment?

Heck no. I'll say that again: "HECK NO!" No film is a safe investment - ever. Do not put money into the film that you can't afford to lose. If you ask your accountant or lawyer, they'll tell you the same thing. It's a lot like horse racing. Chances are you are going to lose and there is always that one long shot that pays out big, but there are no guarantees.

What am I offering you?

In addition to owning shares in the film, you will also receive a "Produced by" credit. That may not seem like much, but that credit would enable you to apply to become a Producer's Guild of America certified producer. That's a big deal. You will also appear in the Internet Movie Database as a full member of the production team - because you will be a part of the production team.

If you get all charged up and decide to finance the whole thing, you would receive the "Executive Producer" credit. If the movie receives any awards, you would be the one first offered the position of going up to accept on behalf of the cast and crew.

Also, anyone who invests in the film will be welcome to visit the set during filming in mid-October in New York, NY.

Any funds that exceed the production budget, because we will still try to cut corners, will go toward promotion and festival fees.

So, what's the story?

Glad you asked.... That part is confidential but, If you are seriously interested in this finding out more about this project, I will be glad to share the concept, the treatment, the budget, and the cast details. Shoot me an email and we'll talk!

Thanks for your time,

That email gained me 5 investors initially, but one had to drop out due to a major health issue. So we ended with 4 investors.

We were able to get through production and we managed to have $100 left over. Now, we re taking the same route again for our finishing funds. It’s not going as well, but we are getting there.

That's how I did it. Good luck!

Logline: Evil is the vulgar lover who loves the body and not the soul. -Plato, Symposium

Every Sunday afternoon for years, two couples: Michael, Janet, Muriel, and Brian, have been coming together to share a meal. However this particular Sunday, the tone of the meal takes a darker turn when they are joined for dinner by an unexpected guest, Brian's young protégé, Erin.

Over the course of the afternoon, the group delves deeply into the conversationally taboo subjects of: religion, politics, and sex. As they talk, long hidden secrets are revealed. Hard truths come to the surface that must be faced. Will this be the their last meal together?

DEVOURING VENUS was written and directed by Marty Hardin, and features an ensemble cast: Haley Beauregard as "Erin"; Eric R. Eastman as "Micheal"; Daniel Scot Kadin as "Brian"; Kristin Muri as "Muriel:, and Maggie Wagner as "Janet". The movie is a production of Hudson West Productions, LLC, and incidental pictures. 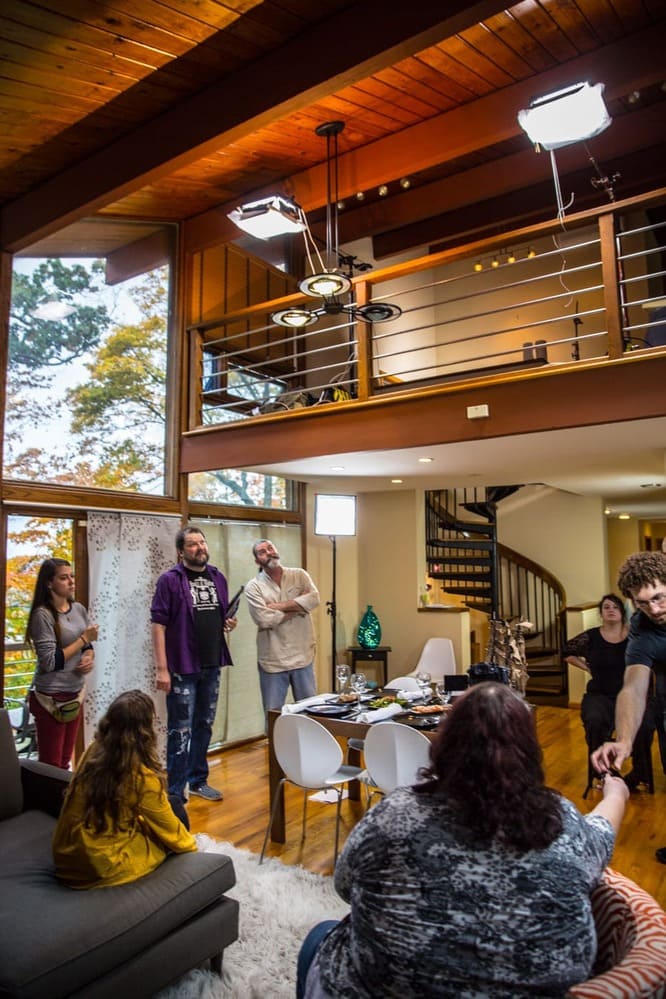