Forbidden Power would cost me around $15,000 per day with cast, crew, extras, accommodations, food, etc. for the 15 days of filming. The six movies I made before were all action vehicles and all but one were martial arts action. The last one, Omega Cop was made many years ago. After that movie, I put all my energy into producing six full-cast audio-books, based on my novels and hiring 19 movie stars that I grew up watching at my small town movie theater. It was a great time in my creative life.

Why Did I go Back to Feature Films?

With those five things in place, I gave myself the mental 'green light' and figured to film the movie a year later. But right away I knew: If good might come from this project, then why wait a year for it to happen? And if bad comes from it, I'll have to handle it no matter what year I spend the money. So I got on the net, found the time of year in Seattle when there was the least rain and set the date starting August 21, 2017.

I could do most of my pre-production at home on the net. Casting agencies now show their actors photos and profiles on their web sites. Many have their demo-reel on them. Forbidden Power had nine main characters to cast and 24 supporting actors. We would also end up using 150 extras for various scenes. Including the 12-person crew, paychecks were given to a total of 184 people. This was an unusual amount for an independent movie where they usually have four leads and a couple of supporting actors. Also, for smaller budgeted movies, locations are kept to a minimum. I was advised by a few that: "You should not be filming this movie with this many actors and locations. You'll never finish on a 15-day schedule. You should be filming in one location with just a few actors."

That is all good and will certainly get a producer a body of work. However, there is always the idea of going for your personal 'masterpiece'. Something that you can't wait to show an audience. Something real, that is a part of you. Both ways are fine, but with the few movies that I get to do, I want each one to engage the audience as much as possible, and be the one story that I want to tell at the time.

This brings us to the subject of filming the movie as a Screen Actors Guild (SAG) union project or non-union. First of all, I planned to pay the actors SAG scale for a low-budget movie which is $125 per day, whether I filmed union or not. Why?

I know that whenever someone gets a job in a movie; whether it's me, or an actor or actress or crew member; what's the first thing their relatives, loved-ones or friends ask: 'How did you get the part? 'What part do you have?' 'What's the story?' 'Where will they film it?' No. The first thing relatives ask is: "How much are they going to pay you?"

This is especially true for actresses with boyfriends who sooner or later, usually sooner, get jealous of their girlfriend getting a part in a movie with a 'glamorous and exciting' cast and crew working in close quarters in often emotional scenes.

You can't blame the guys. It's only natural. But the first thing they attack is, of course; "How much are they paying you." So, I want the actress, or actor to say, "I'll be getting paid SAG scale." That sounds professional and keeps most guys from saying "You're getting gypped." But, some say it anyway.

Indeed, one of our six lead actresses broke up with her boyfriend a week before filming. He got jealous, refused to help her memorize lines, and constantly complained about her being in the movie. Finally, she told him, “I’m going to do this movie exactly how it says in the script.” That ended the relationship.

On the subject of intimate scenes or nudity, I wrote those scenes out very clearly in the script, with exactly how many seconds a kiss would be, what the person would be wearing and more. This is important so that every actor, and especially actresses, know what will happen in each scene so they can make a decision whether to take the part or not.

Thus, I recommend all independent producers to consider paying SAG scale even if you're filming non-union. Actually, the most important aspect of that is so the actors will respect the project as a 'professional' event to be taken seriously. The same goes for the crew if you're hiring professional in the business as I did on this project.

With 63 scenes (not shots, but full scenes) to complete in 15 days, that was an average of four scenes to complete a day. I had completed Omega Cop in 21 days straight, Ninja Busters in 12 days, so I was confident getting this done in 15 days.

The trick is keeping your eye on your watch and getting your scenes in a good, designed master shots, then getting what close-up shots you can during the time allotted for that scene. And when it comes time to move on to the next scene, you have to have the discipline to let the last scene go and move onto the next. The second day of filming I called 'hell day' because we had to complete six scenes in one day, including a fight scene at night in fake fog. We got the needed four shots, two with the boom, two with the Ronin 'steady-cam', and we were thankfully done at 2am. While everyone was happy watching the video playback. (See the photos.)

Post Production was done at Victory Studios. It fun and convenient for me to go from room to room checking the progress and seeing the results of the special effects. For the Las Vegas train crash, I figured I'd have to 'hide' the crash with many quick cuts, but it came out so well, that the crash is mostly one shot that we could hold on for a long time. That's what won us the special effects award at the Las Vegas MegaFest.

We had the premieres in Seattle, San Francisco and Los Angeles. And then Forbidden Power was uploaded on Amazon for USA and UK views, and onto Vimeo where it can be rented and viewed world-wide. And where I would get daily reports and monthly deposits to my bank. No more calling a lying distributor asking, "Where is our money?" with the answer coming back, "Oh, the guy that sold the video rights was robbed in the airport, so we can't send you anything." That's an actual, exact quote from our Weapons of Death distributor.

This new technology for movies is great. And one more thing, in the old days, my movie would play in theaters for two weeks only and then move on. Now movies play and make money forever. It's a great time for independent producers.

After a one-night affair with a mysterious woman, a young man wakes up with sexually transmitted power. He searches for the woman to find out why he was chosen and where her power comes from.

Produced by the director of: Omega Cop - Death Machines - One Way Out - Weapons of Death - Ninja Busters. 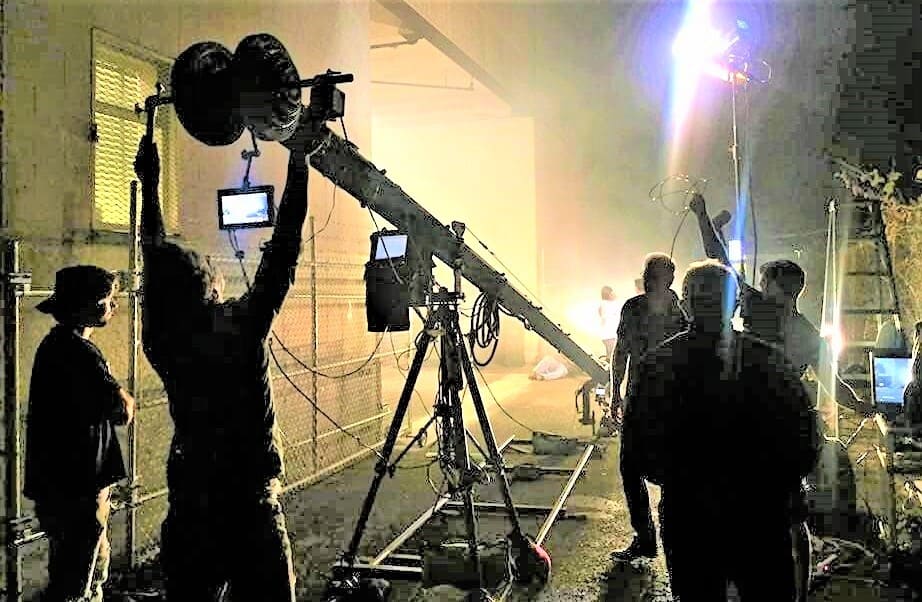 Even at 2am, the fight scene actors were a happy group. 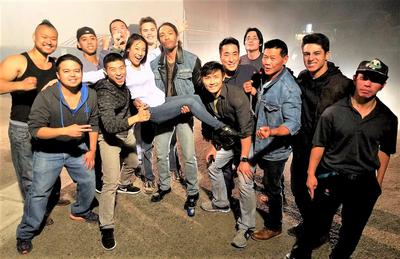 The final shot of the fight where the camera starts on the ground and booms up 20 feet. 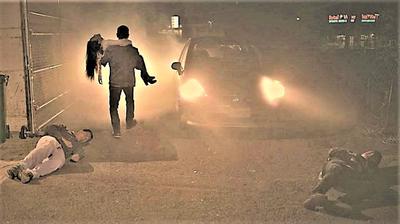