The Warrior Level The Rise of Rene Level Martinez 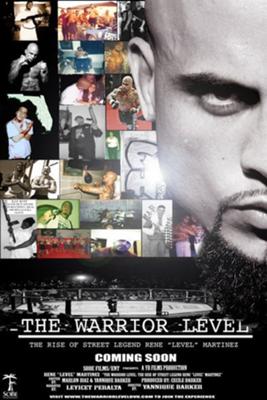 The Warrior Level The Rise of Rene Level Martinez. Filmed behind the scenes of Miami’s "street" life, the documentary 'The Warrior Level' follows the rise of Rene Martinez, a Cuban American fighter known to both the streets and the public as "Level."

Born and raised in South Miami, Martinez’s alias originated from his street reputation for knocking out his enemies in epic fashion. At the age of 12, after experiencing the troubles of a broken home, Level sought a new family and immersed himself into the life of South Miami gangs. Along with 7 of his newly formed friends, he created one of the most notorious street gangs in the early and late 90’s: the Latin Syndicates.

With a record of 21 arrests and public notoriety amongst Miami Police and gang task force units, Martinez eventually turned his violent behavior and talent for fighting into an Internet sensation with his backyard fights. Combined with personal documentary clips and recent interview footage, The Warrior Level tells the story of the "gangster" turned professional fighter and his struggle to abandon his past in order to create a better future for his daughter and family.

Currently undefeated and rising in ranks, fellow mentor and UFC fighter Kimbo Slice is quoted as saying that "Level will do better than me" with his newly discovered professional career in MMA (Mixed Martial Arts).

"I want to show the world how I turned a negative into a positive," Martinez says. “I don’t think anything is gonna bring be down. I’m focused, ready, and I’m gonna go for it."

cant wait to see this movie, i personally know him, but i haven't actually talked 2 him... i was one of his closest friend's girl, and let me tell you this boy has some talent. may god bless him and all of his dreams become true. good luck rene.

IT FEELS LIKE IT WAS LAST WEEK ,WHEN I FIRST HEARD BOUT LEVEL IN 94.I WAS IN PALMETTO HIGH GOING TO KILLIAN. WHEN I HEARD HIS NAME 4 THE 1st time.SPOKEN OUT OF FINE FEMALES MOUTH.HOW HE DROPPIN THEM BOIZ LEFT AND RITE.FEW YEARS LATER I SEE HIM FOR THE FIRST TYME SURROUNDED BY GOOD LOOKIN LATINAS ON THE BEACH.DOING HIS THANG.BOUT 16 YRS LATER .WHATS CHANGE BESIDES THE MONEY ,THE RESPECT, AND THOSE QUICK PUNCHES GETTING MORE USE TO THE SPOTLIGHT.DEADACATION IS WHAT YOU WERE BORN TO LIVE FOR.AND YOU HOMIE GOT ENOUGH TO BE ONE BAD ASS ROLE MODEL.NOT JUST FOR THE NEW GUYS BUT THE ONES BACK THEN TOO..R.I.P TO ALL THE VATOS THAT COULDNT SEE YOU RISE,LIKE WE DO...///THAT VATO SCARFACE.[ROCKMONSTER WATERFALLS]

When will the movie release?
by: Fan

I have been waiting to see this documentary!!!!!! WHEN??????? Saw the Spanish version but I would like to see the English one...will a definite date be up soon?

THIS FILM IS GONNA BE EPIC!
by: James R

I have been hearing about this film and have seen the recent trailers and content. It looks fabulous! Miami is already very familiar with Rene "Level" Martinez but this film will really give an in-sight to the man's life. Can't wait to see it!