How They Got Started

Learning about independent film companies, and how they got started is important for any indie filmmaker. More often than not, these are the only movie companies with whom indie filmmakers have the potential to work. However, the origin stories of your favorite indie movie company in the film industry may surprise you. Quite often, there are some similarities these movie companies have in common, but their stories are all uniquely their own.

What is an Independent Film Company?

First, let's start with what an independent film company even does. What are their roles in the filmmaking process? Of what, exactly, are they in charge?

Independent film companies are always separate from the bigger movie studios in the film industry, like 20th Century Fox or Paramount Pictures. These independent movie companies tend to offer lower budgets when financing movies, as opposed to the larger movie companies. However, it is possible some indie movies can gain a higher budget from some of the more successful indie movie companies.

These indie movies deliberately do not have the stereotypical feel many mainstream movies have. A lot of filmmakers are rejected by major movie studios if their film is too "different" or does not hit the fields and stories for which they are looking. This does not mean that the filmmaker's story or movie is bad - it just does not fit the requirements major movie studios are willing to invest in at the time.

How did Successful Indie Film Companies Get Started?

For filmmakers looking to start their own indie movie company, learning about the success stories, and the beginning stories, of some of the big independent movie companies out today, are always a great way to gain both inspiration and motivation. Where does the film financing come from whether for a motion picture or low-budget films? Do you turn to crowdfunding sites or major studios for financial support? Do you use a production company or independent producers? Here is how the best of the best made it.

The two independent movie companies mentioned here are two of the best in the businesses and are doing quite well at the moment. Not only are they producing quality content, but their distribution has risen significantly. They also have begun to produce movies that are getting festival, critical and Academy Award acclaim.

In 2015, A24 took on producing their first feature, Moonlight, in partnership with Plan B and Adele Romanski (source: Deadline). A24 is fully financed the film and owned the worldwide rights.

If you are researching independent film companies because you want to send them something, ask for money, or try to work with them, we wish you luck. Like most independent film companies, they do not accept unsolicited materials. For example, here is what is on the Annapurna website, "For very super-boring legal reasons, Annapurna Pictures does not accept unsolicited material." They probably already have at least 50 projects in some phase of development right now, and sorry to tell you, they just don't want yours.

You do not need to be the offspring of a billionaire or have an extensive career in film like the founders of Annapurna and A24. Do you need money to start a movie company? Yes, and you need a substantial amount. However, it does not have to be your own funds. Just like indie filmmakers do, you can find funding elsewhere. Whether it is from donations from family and friends, or from grants given to you from people actually in the movie business, finding financing is possible.

Just like every successful filmmaker's beginning, every successful independent movie company has a different beginning. How they started, or how they became successful, differs. However, there was one component both Annapurna and A24 shared: their ability to only produce high quality, creative movies. Refusing to just produce and create quality that would bring them money, both of these companies are great examples of the success that can come if you consistently choose quality art over financial gain.

Now, we all know that it is easier said than done. But if you stick to your creative instinct and vow to just make, produce, or distribute art that you actually love, it'll all be worth it. And that's what makes independent movie companies so great. 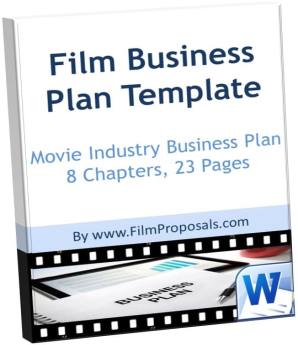 An important process for everyone involved with filmmaking to do is to plan. Planning is everything. Our Film Business Plan Template helps every filmmaker plan for their business, in all ways. Whether you consider yourself a beginner or an advanced filmmaker, this template is incredibly helpful for all. Our plan was created by industry producers and movie investors with one goal in mind: help those who want to find movie investors and movie financing.

Get Started with Your Independent Film Company Business Plan

One of the really great things about our Film Business Plan Template is the real world examples we provide. One of the best ways people learn is by seeing examples that have actually worked in the past, and that's one of the many lessons our tools and templates provide. Throughout our templates, you will see real examples of business plans that have worked in the past. Through every step and section, you'll see a component used in real life that has worked successfully for others.

Back to Top of Independent Film Companies