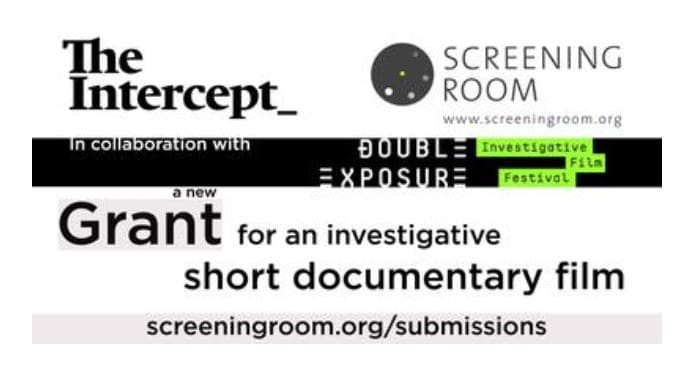 The Intercept, ScreeningRoom and the Double Exposure Investigative Film Festival are excited to announce a new grant for a short investigative documentary film.

The selected documentary filmmaker or video journalist will receive $5,000 towards the creation of a short, investigative documentary film, a one year ScreeningRoom Pro account, mentoring, and, for filmmakers based in the US, in-kind use of a Canon C300 Mark I cinema camera for ten days.

The selected documentary filmmaker will also have the potential for publication of the completed work on The Intercept, and the potential to screen their short film at the Double Exposure Investigative Film Festival in 2019.

The Intercept is dedicated to publishing groundbreaking investigative work, which is more important than ever these days. We are looking for subject matter that is investigative and visually compelling. Topics of interest include civil liberties, national security, immigration, environment, politics and human rights.


Back to Top of ScreeningRoom Documentary Film Grant